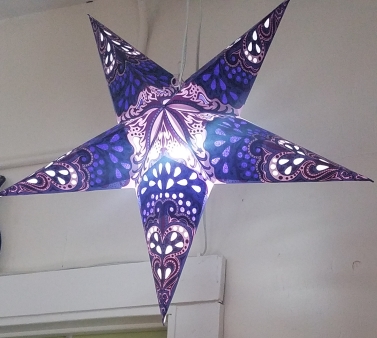 After a long hiatus, I have returned to the blog and Mission KnitPossible on a snowy New Year’s Day from my new KnitterWriter’s casita. I moved house in September and now have this lovely space, which we call the west wing of our little main house. The photos above all are views from or within the casita.

My other news is that I actually finished the first project for Mission KnitPossible in August (except for weaving in a thousand ends — still in progress — and possibly lengthening the cuffs of the sleeves a wee bit, at my daughter’s request). Here is a report from July 2018 about the sleeve-knitting process that I was certain would drive me either mad or to drink before I finished.

I began my Mission KnitPossible journey a little over five months ago with what I’ve come to call the Circa 1987 sweater. I’m still with that sweater and trying not to feel sheepish about the fact that I’ve not yet finished even one UFO. I did a bit of an inventory and recognized that I have finished and knit on other things and, therefore, have not necessarily failed to accomplish something.

Then I discovered the designer, Jenny Faifel aka SweaterFreak. in May, she called for test knitters for her June Afternoon shawl design, and I could not resist.

And while at a Sisu Designs knitting retreat at Ghost Ranch in April with Dagmar of Zia Woolz in April, I finally gave in to the temptation of the fade. With some Madeline Tosh Twist Light in the Abiquiu colorway, Happy Feet Splash in Tuscany Spice, and two Zia Woolz colors in her Dreamcatcher base, I began a fade cardigan using the Peridot Cardigan design by Marie-Christine Levesque of Tricot Design MCL.

I opted for stockinette rather than the all-over stitch pattern the designer used, as the fade is the star here, but I love the twisted rib and the shaping of the sweater. The body is complete and I am halfway through the first sleeve.

So Circa 1987 still has not had its debut in the 21st century but I am, much like the tortoise, making my way. It’s been a sleeve issue. The pattern calls for the sleeves to be knit in the round from the cuff up and then sewn into the armholes. It seemed much more efficient to pick up stitches at the armholes and knit down. I would simply switch the increases to decreases. How difficult could that be? Well, there also was the business of these being enormous vintage 80’s sleeves which I wanted to modify to a more narrow fit. It didn’t seem that it would be terribly difficult, as the armhole was small enough to pick up 128 stitches, rather than the 140 stitches at the armhole in the pattern, and from there it would be only a matter of calculating decreases.

I knit one sleeve and felt triumphant. I began the second sleeve, began looking at the decreases more closely, and realized they looked very sloppy. I should know to k2tog on one side of the center stitch and ssk on the other side. But did I do that? Of course not. I changed my approach on the second sleeve and the result was much more tidy, looking quite less like a mottled, bumpy fair isle covered alien, as the first sleeve did.

And so, came the first moment of truth. I would have to re-knit the first sleeve. After finishing the second sleeve, I ripped out that first sleeve and started again. My friend, Paula, made me feel like a champion knitter when she commented on how, of all the knitters she knows, I am the most willing to rip back mercilessly when the knitting calls for it. “You’d rip out an entire sweater!” she proclaimed on the phone from Seattle, as though the willingness is a super power. Thank god for Paula, who always makes me feel like a knitting super hero, even though she is a wildly prolific knitter and probably already has finished more knitted items than I will in a lifetime.

Little did I know, more super powers would be required. I was within four inches of finishing that re-knit sleeve last week (now the third sleeve I had knit for this sweater), when I realized that I seemed to have too many stitches on the needle. I should already have finished the decreases, I thought. Something is wrong here. And, indeed, something was. I had forgotten when I knit the second sleeve that the last 15 rows of the sleeve are knitted straight in the pattern, meaning that, in my reverse process, I was to knit straight for the first 15 rows of each sleeve before beginning my decreases. I had not done so on the second sleeve, but that sleeve looked fine. The first sleeve (which I was now re-knitting) was bigger than the first – noticeably bigger, almost to the cuff, with more pattern repeats in each round – because I had followed the instructions in the pattern and knit the first 15 rows straight without any decreasing.

And so, I ripped that first sleeve again. I’m not even going to describe untangling the different colors of yarn as I unraveled. I just patted myself on the back for my zen mentality, which I really do have with knitting, thankfully. And I am now knitting peacefully on this sweater’s fourth sleeve.

To review my process in the spirit of Abbott & Costello, I began my Sleeve Journey by knitting Sleeve #1. Then I knit Sleeve #2. When I noticed the unsightliness of Sleeve #1, due to the improper decrease method employed, I began re-knitting it, causing Sleeve #2 to become Sleeve #1, as it was the first sleeve I knit properly. The original Sleeve #1 was now Sleeve #2 but I was re-knitting it into Sleeve #3. Then I discovered that knitting now-Sleeve #3 according to the pattern (in reverse) left it too large, unlike the now-Sleeve #1, and I ripped yet again, resulting in my knitting on Sleeve #4 (which originally was Sleeve #1 in this whole mess!).